After parking at the Beauty Creek parking lot at the side of the Icefields Parkway, we skipped across the low stream and headed towards the trees.  We hit the old roadway and saw the cairn indicating the route up through the forest.  After a gentle incline through and over the trees, the trail steepened considerably as we made our way up the mountain. 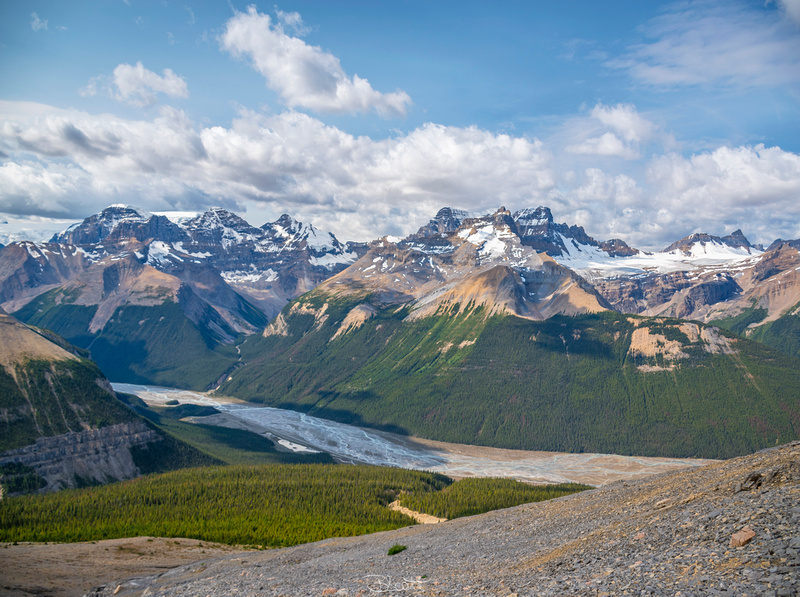 At around 3km and 500m of elevation we started breaking out of the trees and could see the summit, which was still a ways away. The route was pretty straight forward and the trail was obvious until we hit the bigger scree and talus.   We followed cairns for most of the way up until we were close to the summit ridge, at around 6km. We then headed for the edge and were not disappointed with the epic views down and towards Pobokton Pass area. 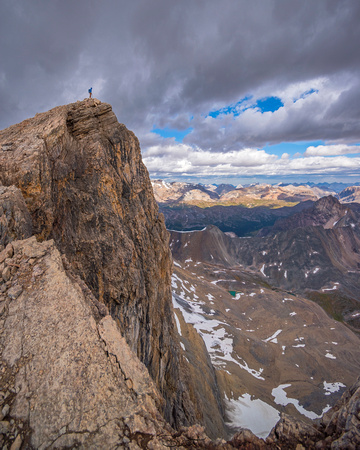 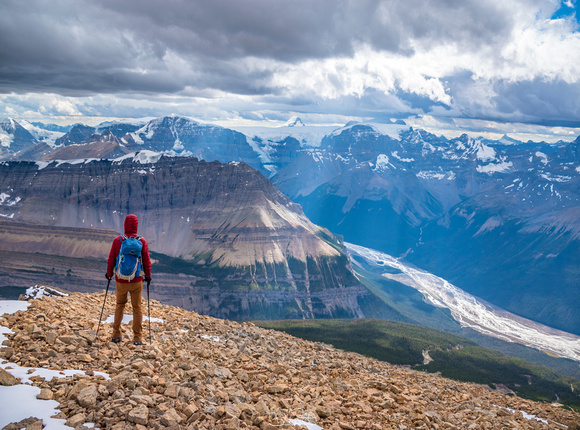 Tangle PeakA hiker looks towards Tangle Peak from the summit ridge of Sunwapta as it juts up from the Icefield Parkway.

After taking a bunch of photos from the ridge, we continued up for about another kilometer until we hit the summit.  There is a large cairn with a pink summit register with Fireball, a Magnum condom, and of course a register and pen inside.  We laughed at the condom, took a swig of the Fireball, and filled out the register.  It was plenty chilly up there, so we made our customary summit coffees and I took more pictures along the ridge, taking care to stay away from the thin cornice (see pic below). 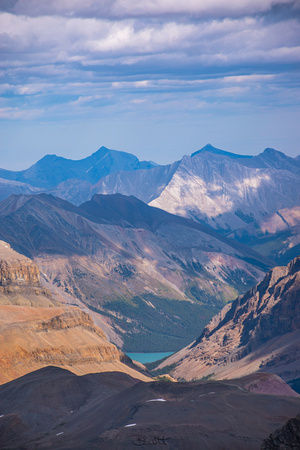 Brazeau BeautyA zoom towards Brazeau Lake finds it peeking out among the cliffs. 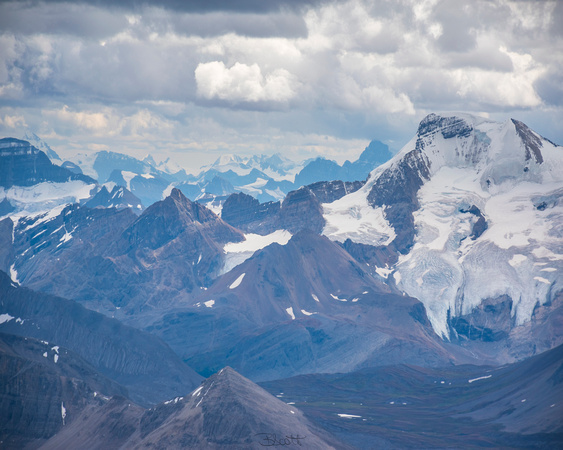 Icefields GiantsTiny Boundary Peak is dwarfed by the giants of the Columbia Icefield. (Mount Athabasca to the right) 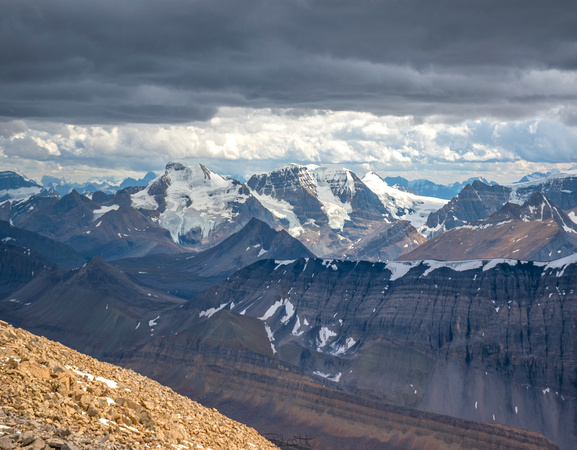 Tangle Ridge A more zoomed out version of the previous shot. 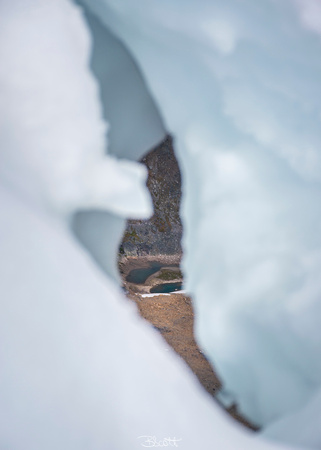 Cornice PeekabooWhatever you do, do NOT step on the cornice that abuts the summit of Sunwapta Peak. I took this shot with a zoom lens on my camera, and my feet on solid rock. 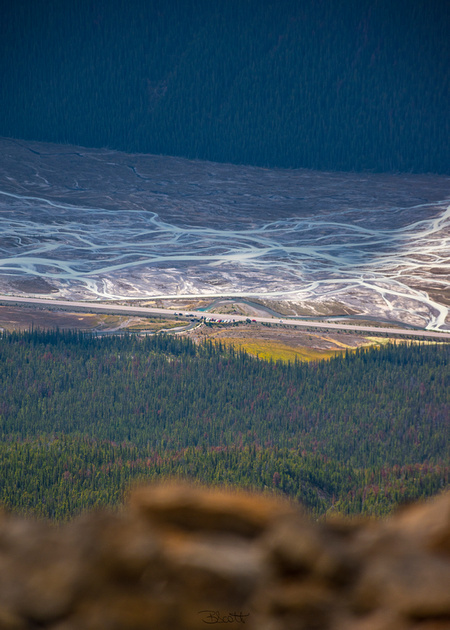 Tiny Vehicles - 7km of hiking awayWe were the only ones at the Beauty Creek parking lot when we started the hike, but by noon it was full! We didn't see a soul all day though, and when we got back down, our truck was all alone again. 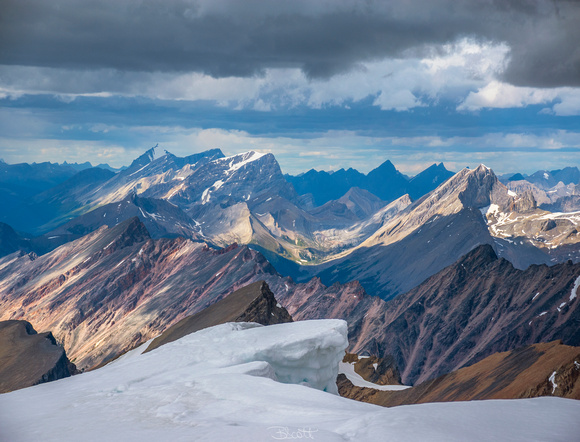 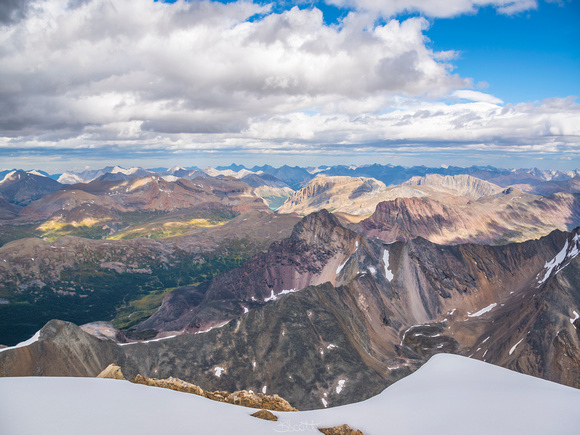 Summit View - SELooking towards the tiny (from here) Brazeau Lake, Pobokton Pass and Jonas Shoulder areas, and all the varied splendor of Jasper National Park 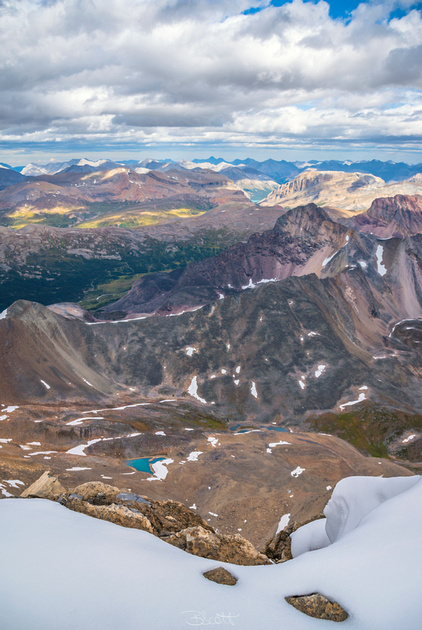 Sunwapta DownA similar view of the previous shot, but with an emphasis to the area at the foot of the mountain 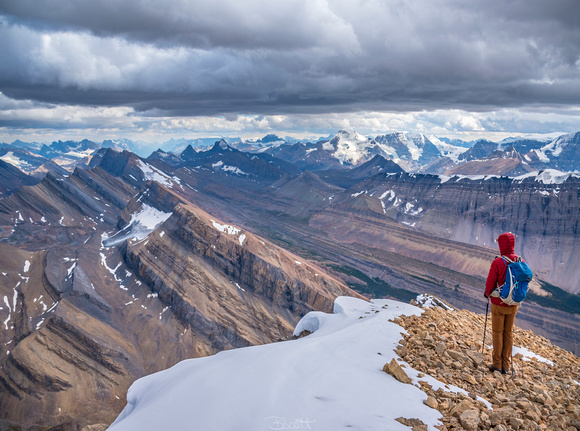 Geological GorgeousnessA view south includes some impressive upthrusts and a hint of the smoke that was heading our way from the fires down south.