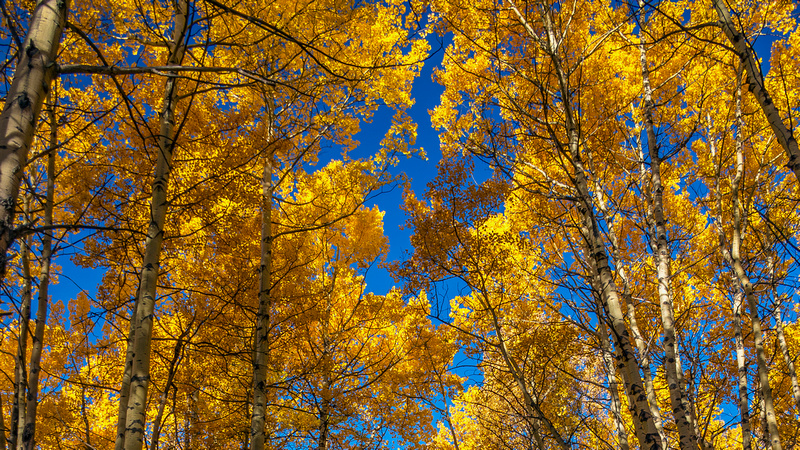 We woke up Saturday morning raring to go!  We didn’t get on the road as early as we had hoped, but on the road we were nonetheless.  The sky was a beautiful blue, with wispy white clouds adorning the mountain tops as we drove down the epic Icefields Parkway. There was fresh snow on the peaks and cliffs that made their vertical relief seem that much more impressive, their nooks and crannies that much more obvious.  We didn’t make our usual stops since we were late getting going, but we did pull over at the Athabasca Pass overlook for a panoramic view of the valley…and the last cell service we’d see for another three hours! Although there are many places that are great side trips (Athabasca Falls, Sunwapta Falls, Honeymoon Lake, Tangle Falls, Beauty Creek, or anywhere along the Athabasca and Sunwapta Rivers) on the way through to the Columbia Icefield, we just admired the vast beauty from the vehicle; we have of course, been lucky enough to drive this road many times.   When you drive down the hill to the huge glacial moraine that is the Columbia Icefield, it’s like you’re driving on another planet. The vastness of the arctic tundra landscape is mind-blowing, accentuated by the looming peaks of some of the tallest mountains in the province and the glaciers that accompany them. The wind is usually gusting when we drive through, and an extra layer is always needed for adventures. 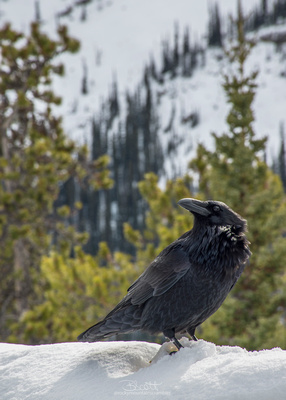 I named this fellow Edgar. 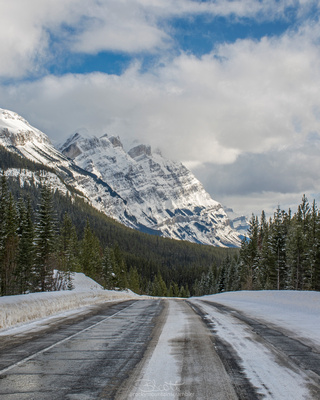 Looking towards The Ramparts on the Icecfield Parkway

But, since we were on a mission to drive south, we carried on into Banff National Park, past Wilcox Pass (a lovely hike to stretch the legs) and Parker Ridge trailheads (incredible views) and on down Big Bend towards the Weeping Wall. On any given wintry day, one can spot ice climbers up on the massive ice wall.  On we drove past the snow-covered peaks that line the Parkway, until we came to the sunny Saskatchewan Crossing.  The road crosses the North Saskatchewan River and you get spectacular views on either side; west into Glacier Lake Valley, and east into David Thompson country, where the beautiful and bubbly Abraham Lake rests.  Just over the bridge is a pullover for Mistaya Canyon, another fabulous place to stretch your legs and explore the impressive chasms and pools of water further up. 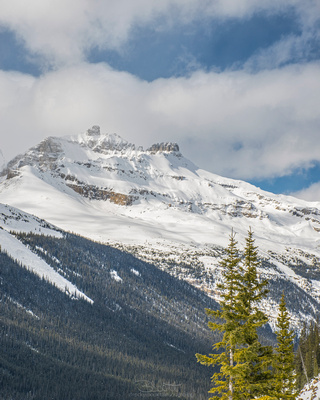 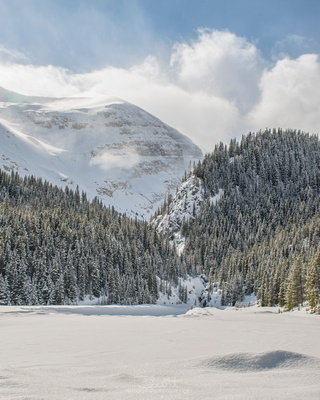 The road from there curves up and then down to Waterfowl Lakes and the impressively “peaky” and always photogenic Mount Cephren.  Next up is Bow Summit, which in the winter is a slightly longer hike up to the viewpoint, but still another great place to stretch your gams if the weather and light is right.  Bow Lake is the next big stop and has excellent pit toilets of which to take advantage.  A walk around the lake in any season is a definite must, as there is much to see within a short circuit of the lake shore, including the historic Num-Ti-Jah Lodge.  In the summer the lake is Gatorade blue, but in the winter the vastness of the snow-covered area is impressive, especially Crowfoot Mountain and its lovely glacier to the south. 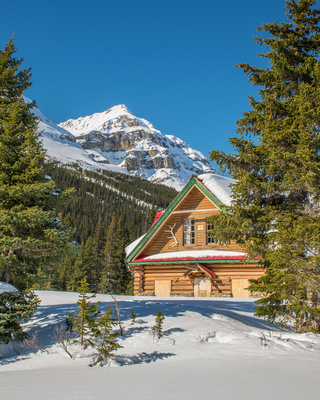 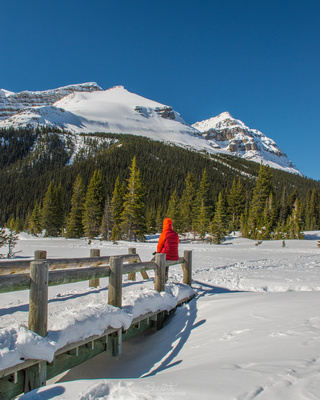 Back on the road, the next great place to wander is Herbert Lake, which of course is snow covered in the winter, but usually provides a lovely reflection in the summer months. Soon you’ll pull into the Village of Lake Louise, where you’ll have your choice of three excellent coffee shops that offer soups, sandwiches, bakery tasties, and your choice of hot beverages for the road. Taking the #1 south until Castle Junction, then turn west, eventually entering Kootenay National Park.  The three main spots that we’ve enjoyed stretching out legs and grabbing some pictures in the past are Marble Canyon, Numa Falls, and Olive Lake.  At the southern end of the Kootenay Parkway lies Radium Hot Springs, in which one day I would love to take a soak.  Just into town on the west side of the road is our favourite place to grab a salad or sandwich (or a cheese stick wrapped in bacon!) to go at the Mountain Market.  The market is adjacent to the Kootenay Visitor Center, which provides bathrooms, a historical display, taxidermy exhibit of the local fauna, and a 3-D topographical map of the watersheds.

Back on the road south brings you through the Columbia River Watershed, until the border.  Although the drier climate and smaller mountains may be less impressive than the Rocky Mountains, the drive is still a pleasant one. Once across the border, we stopped in the quaint town of Eureka, which definitely deserves a walk down their main street.  After that it wasn’t long until we were pulling into Whitefish, excited to see our new home for the next three days on the slopes of Whitefish Ski Resort. Snow Bear Chalets did not disappoint! Our lovely host Gail phoned to make sure that we got in ok and gave us some information about the luxurious lodge.  We explored the treehouse, excited about the gorgeous architecture and layout – the kitchen (fully outfitted) was a perfect size with a huge marble-topped island that doubled for extra counter space as well as the dining area. Off the kitchen was an open living room situated around the fireplace, with amazing views out the huge windows to the deck.  When we ventured out we found a BBQ, seating area, and a hot tub.  Back inside and past the fireplace brought you to a bedroom with large sliding doors for privacy and large windows that let in the golden light.  Up stairs, back past the entrance way with ample storage for coats, ski boots, and anything else, was the loft with the remaining large bedroom and ensuite bathroom (which, like the lower level, had heated tile floors).  The staircase is coiled, as it is in the treehouse turret, and gives way to the large room with a view over the living room and deck area to the ski hill.  There is a third and magical level with a ladder leading to a round bed and a roof of stars that glitter. After we explore the might treehouse, we unpacked, poured some bubbly, and scurried out to the hot tub to watch the Ski Cats drive by one by one to groom Whitefish Ski Resort. 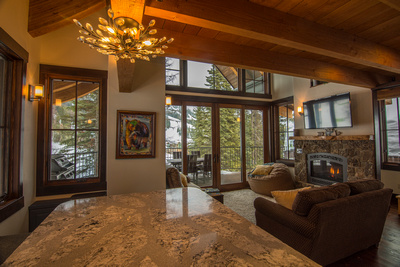 Standing in the kitchen of the Tamarack Treehouse, looking out past the deck to Whitefish Mountain Ski Resort 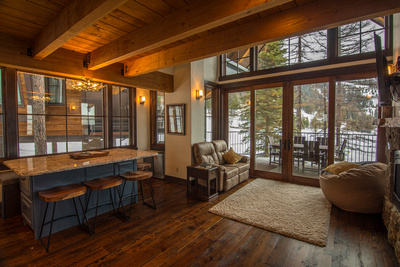 The inside of the Tamarack TreehouseSnow Bear Chalets